Showing posts from May, 2009
Show all

Gonzo: The LIfe and Work of Dr. Hunter S. Thompson: A Goggle-Eyed and Sleep-Deprived Appreciation 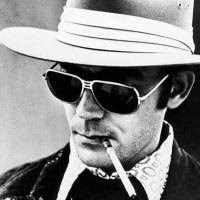 I spend a lot of nights staying up way too late, way too long, attempting to find my muse. The computer screen is often a pupil-less eye that stares at me more mercilessly than any God, Devil, or jackbooted authoritarian figure, and often its cold unflinching blankness will leach the motivation, the desire, the sheer heart-bursting joy of creating that writing gives from me. I allow the simple mundane reality of daily life to become, in its own beige way, a lazily-lethal beast that sucks my soul like a hyena extracting marrow from a zebra's scarlet-caked rib bone. I've recently discovered that the best thing to do, especially if you can't set the ego aside and just roll your eyes back in your head and create, is to set the ego aside and to look outward for inspiration. So having just finished viewing Gonzo: The Life and Work of Dr. Hunter S. Thompson feels like a massive adrenaline shot to my insides, despite (because of?) the fact that it's 4:30 in the AM and I'
Post a Comment
Read more

Zombies on Parade at the Seattle International Film Festival 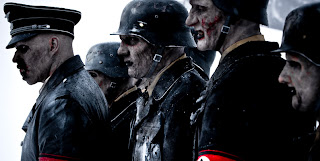 Regular visitors to this here corner of the Blogosphere surely know of yours truly's ardent fondness for a good--OK, make that any--zombie flick (see this sub-folder of said corner for material evidence of said fondness). So imagine my joy when the Seattle International Film Festival unleashed two--count 'em, TWO--cinematic odes to the living dead as the opening salvo for their Midnight Adrenaline midnight movie series. And imagine that joy amplified by the fact that both zombie movies delivered. The one with the biggest buzz, Norwegian director Tommy Wirkola's Dead Snow , brought its packed house everything a discerning gutmuncher fan could ask for: Nazi zombies, plasma projected by the gallon, rended limbs, tongue-in-bloody-cheek humor, and--yes--gutmunching. The Cliffs' Notes setup (as if most zombie movies require something more substantial than a Cliffs' Notes pamphlet for setup): A group of Norwegian med students trundle up to a remote ski lodge for some re
2 comments
Read more

Flight of the Conchords: A One-Two Punch of Humor and Harmony 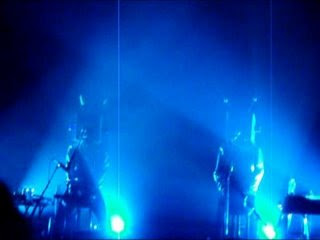 Every now and then, you get to experience art from someone so damned perfect at what they do, you question whether anyone will ever be able to touch it. Not in a jaded, cynical way, mind you; strictly in a "Man, the bar's been raised to the Stratosphere, dude" manner. Ironic, then, that Kiwi pop jokesters Flight of the Conchords--two guys who've made a career out of poking fun at their own foibles and shortcomings--inspire that kind of awe in me, and apparently a lot of other people, too. The Conchords sold out three shows in a row at Seattle's sizeable Paramount Theater May 11, 12, and 13, and the missus and I coughed up the bucks to see all three performances. Yep, they're that kind of special; that kind of funny; and that kind of genius. Calling Bret McKenzie and Jemaine Clement's act stand-up comedy or rock parody sells 'em short. Sure, like a lot of Weird-Al-come-latelies they co-opt current and past pop music and reconfigure/regurgitate it thro
1 comment
Read more

May 06, 2009
There's this stack of papers, about 100 sheets or so. On those papers are letters. Those letters form words; and the words, sentences. Some of those sentences form dialogue--words that come out of the mouths of characters in a film, play, or TV episode--and combined with descriptive paragraphs, they form a story. It's called a script. And the guys who made X-Men Origins: Wolverine forgot one. 'Nuff said. OK, maybe not. A few random observations, more interesting than the movie itself: 1) You know you're on shaky ground when one of your movie's superheroes is played (badly) by a member of the Black-Eyed Peas . 2) I dare you to find a cheaper-looking $100-million-plus event movie than this one. It's shot with the workmanlike indifference of a Sci-Fi Channel late-night schlocker, the action scenes looks utterly cut-rate, and the CGI version of Patrick Stewart that surfaces at the film's end makes the cut scenes from the cheapest videogames look David-Lea
1 comment
Read more

May 03, 2009
So what, might you ask, have I been doing lately, besides--y'know--working and sporadically microscoping the Petri Dish? Lotsa stuff. Natch, there's the whole working thing. Seattle Opera opened The Marriage of Figaro this evening, and it looks like a hit, so I'll be a busy man for the next few weeks. But not entirely to the exclusion of creative fun and pop culture imbibement, thank God. The Petri Dish entry from last October about walking my workplace neighborhood (replete with photos) inspired me to actually do a Blurb book collecting several of my photos. Blurb's incredibly easy and fun to use, a user-friendly bit of layout software that even a thick-neck like me can use with ease. I'm pretty pleased with the resulting tome. Feel free to go here and take a look (you can even preview some of the finished product). I'm also experimenting with writing (shudder!) fiction and free verse on a new WordPress blog. It's over here if'n you'd likewise
Post a Comment
Read more
More posts