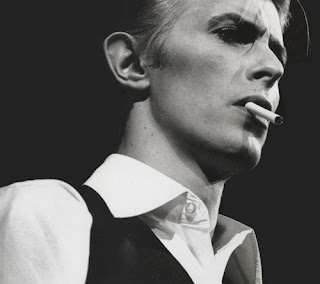 So I got a little behind. When you're up 'til 3 in the am writing trivia questions, this'll happen. Fortunately, both of these categories are easy for me.

During this period, I practiced guitar pretty diligently and got to the proficiency of a pretty skilled twelve-year old. One of the things you learn when you first pick up the guitar is that some of (OK, MOST of) the greatest rock and pop songs on the planet are pretty damned simple to play. So it's kind of a rush to discover a great song, a song that you love, that you can play. One of my first such discoveries was this one. There's a terrific guitar tab for it that's right in my vocal key, and with some practice...I sound like a pretty skilled twelve-year old playing David Bowie's "Heroes". So one of the songs I can play is "Heroes." But give me a week to practice/re-learn it first.

On the flipside, one of the other things you learn when you first start dinking around on a guitar is that, sometimes, its not as easy as you think. Whether it's the windmill power-chord goofball wizardry of Cheap Trick's Rick Nielsen, or the acoustic picking of Nick Drake, I do appreciate really good guitar playing.

I don't put a lot of cop into wankerly guitar virtuosity (songs, not wheedling solos, are my bag most of the time), but David Bowie has always aligned himself with amazing guitar players. Ironically, while "Heroes" is incredibly easy to play, "Scary Monsters and Super Creeps" sports squalls of incredibly precise yet crazed guitar soloing by Robert Fripp. I will never be able to play like this. But I'm glad that Fripp does.